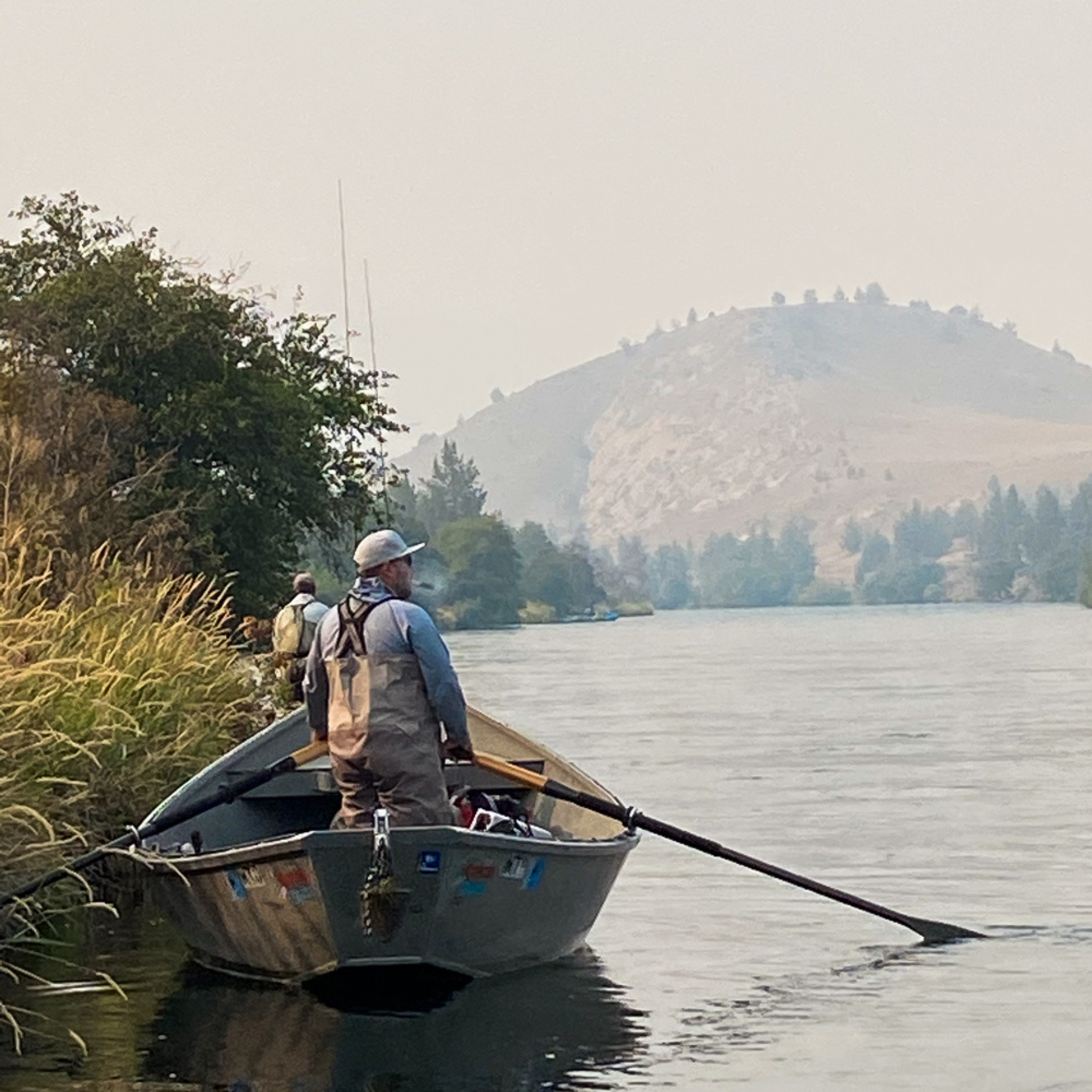 I have been having quite a few interesting trips down the Deschutes this year, and there was no doubt in my mind that Labor Day weekend would not disappoint. I met up with Kevin and Shandy and my old buddy nick. Now despite what you may have heard, Nick is not dead, he didn’t OD on too much sugar, he is not a stay-at-home dog dad, and he is still as energetic as ever. And just to answer the question before you even ask it yes I did punch Nick for you and tell him he was missed.

I got to the river Saturday afternoon just in time to get my boat in the water and get downriver to camp for a little evening fishing. I pulled onto camp and walked upstream with Nick and Kevin for the evening fish. It was smoky and Caddis were coming off nonstop. And as you might expect trout were greedily coming up and eating everything in sight. We all landed a few fish and headed back to camp for some cocktails and a little catching up.

Sunday morning we were up early with high expectations for the days fishing. This was Kevin's maiden voyage down this stretch in his new boat. Part of the morning was spent talking about the best way to rig a raft and other boating minutiae. We pushed away from camp and as you would expect there were trout rising everywhere. We had the best luck with Antonio’s Superman Caddis, The Finfetcher Caddis, and The Hotspot Elk Hair Caddis. In between catching trout on dries, we did nymph a little and to no one's surprise, it worked as good as ever.

We got down to Whitehorse around 4:00. This was going to be Kevin’s first time through on the oars so we scouted the rapid and talked through the line. All three boats made it through without a hitch. We were celebrating and laughing when we came around the corner of middle Whitehorse and I could see something off in the distance. This was bad, a boat had gone down the wrong channel and was pinned on a rock, and I could see there were still two people stuck on the rock. We pulled over to see if we could help in any way. There were already a couple of people on site helping out. I gave a second glance at the guys that were stranded and their crew trying to rescue them and they were all wearing thongs. It took me a minute to understand what was going on around me. After about an hour of helping as much as we could we moved on as we still had about 5 or 6 miles to go and it was getting late.

We got up Monday still trying to process what we had seen the day before. We had a leisurely morning in camp and made a plan for the day's fishing. I had a few dry fly spots in mind that I was hoping would be good. And as my fortune would have it, I lit them up on dry flies all day. I mostly fished back-eddies that I could spot fish rising in. My best fly has been Antonio’s Adult BWO and it didn’t disappoint on this trip either. I love back eddy fishing. The fish are more challenging, the casting needs to be precise, and you do t get a lot of chance. This is where you test your skills. I was definitely the victor this day and sore-lipped quite a few nice trout.

Fall fishing can be so good but you’ve got to be prepared for anything. It was great seeing old friends and catching fish, and if you want me to punch Nick for you next time I see him just let me know!

Deschutes RiverTrout
Josh Linn
Be the first to comment...