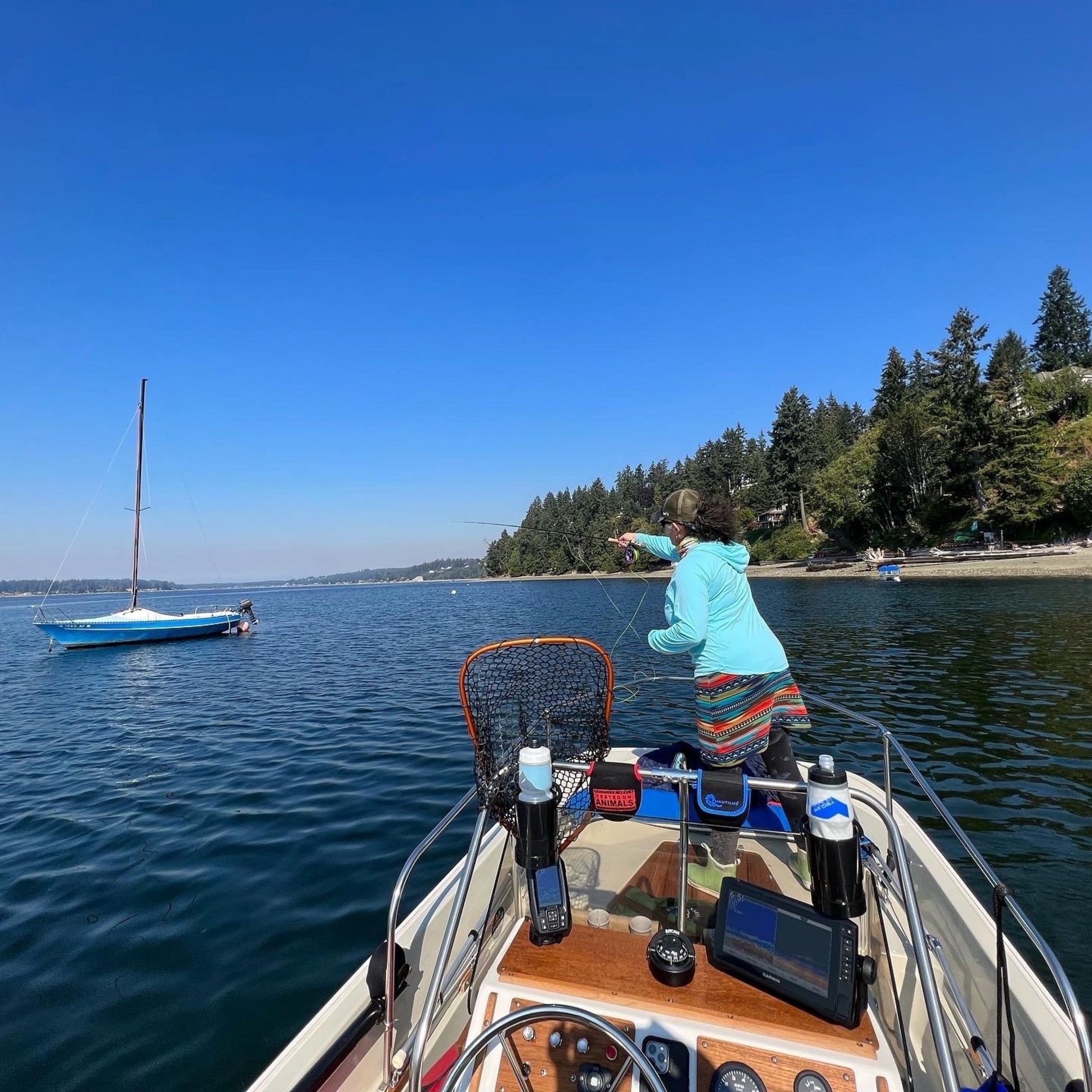 Summer took her final bow as autumn slipped through open windows this last week. Now that extra blanket we kicked aside for months is welcomely pulled over chilly shoulders. Fall is our favorite season of the year and one with a multitude of angling opportunities. Our imagination and available time are the only limits to where the adventure will take us.

The focus for most is still the lower Deschutes and swinging flies for Steelhead. It's been a bittersweet season so far, with improvement over last year, but still, returning numbers are of concern. Currently, approximately 16,000 Steelhead are between The Dalles and John Day Dams, which gives the optimists among us a reason to get up in the dark and put on damp waders. Our resident optimistic Fly Czar has been hitting the Deschutes plenty hard and reports that angling success has been hit and miss, depending on the day. That is not to say he's giving up; he's just hoping the cooler weather will jumpstart the success rate. He's also noticed large numbers of Fall Chinook in the river, which probably has something to do with the lackluster Steelhead success. Chinook can be bullies and don't like sharing space in the river with anyone. The Steelhead moving through are probably a little spooked from being chased off by Salmon whenever they find a nice place to rest. This, too, shall pass.

Trout chasers are enjoying slightly less pressure on the upper stretches of the Deschutes above Maupin as the Steelhead crowd focuses their attention downriver. Resident Redsides are more than happy to keep things interesting. Caddis and misc. Mayflies will be the focus as cloudy days kickstart BWO hatches. Dry or Hopper/Dropper with a Caddis Pupa would be a place to start. Goldenstone nymphs seem to be more active as the water cools, so don't miss bouncing your favorite pattern deep where the big fish feed. Euro aficionados might step up to the Czar's Rib Roast for the point fly, with something slightly understated above it. Usually a Spring thing, Trout Spey believers can double-dip by swinging smaller Steelhead patterns or go old school and tie up a few vintage Woolly Worms on a stout hook. Plenty of Steelhead and Trout have fallen prey to a simple Woolly Worm fished on the swing, with a little twitch once in a while to make it swim.

Summer Steelhead and Coho are pulling anglers away from College Football games, late-season garage sales, and honey-do projects here in the local area. Coho are in the Clackamas now, and a few fresh Steelhead seem to have followed them home. Those late Summer Steelhead will soon be joined by their early winter counterparts on the Clack as October brings shorter days and longer nights. Coho are staging at the mouths of Willamette tributaries above the falls, just waiting for rain. Think Pink.

On the coast, Coho and Fall Chinook are slipping into tidewater and beyond, improving your chances if Searun Cutthroat are your target species. Salmon regulations on Tillamook and Nehalem Bay require a decoder ring, so make sure you know the rules. Hit tidewater or the first few miles of coastal streams with your favorite Searun fly. Don't have one? Try a Borden's Special, Spruce Fly, or Reverse Spyder; then, you'll have one for next time.

Farther north, Puget Sound entertained Jennifer and me for a few days of Searun Cutthroat and Coho fishing. We are still learning this fishery, and thanks to my friend, Blake Merwin, at the Gig Harbor Fly Shop, and my Scott Fly Rod rep, Dan Marshall, we are slowly making progress. It's safe to say I love saltwater fly fishing, and exploring the bays and inlets of Puget Sound in itself is a pleasure for me, but add feisty Cutthroat, resident Coho, Blackmouth, and adult Coho to the adventure, and it's hard to come home. I will not even pretend to have all the answers for this fishery, but over the coming years, we'll have fun trying to figure it out. A mix of weather, including winds to 20mph from the SW, made Thursday challenging, to say the least, but dinner on the bow deck of the Lyla, then heading back out as the evening breeze settled down, made for a memorable evening to finish off our angling vacation. You don't need a boat to enjoy this fishery or stay on the Lyla. Feel free to hit me up for details.