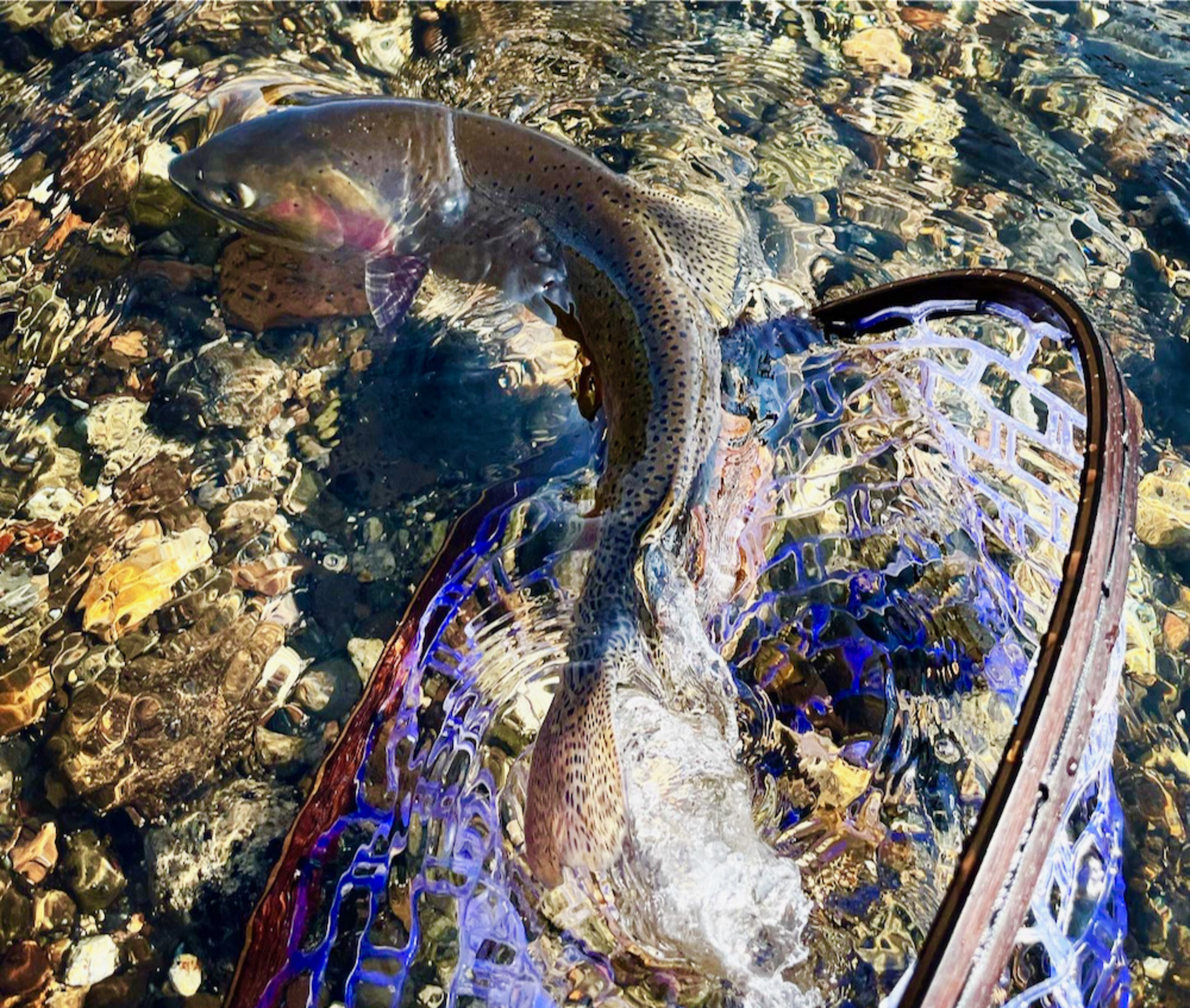 Leaving the Lamar Valley and the shutterbugs that lined the highway looking for wolves, bears, and other critters, we made a slight detour to Slough Creek in hopes of adding it to our list of Trouty encounters. The fading day brought on a pressure change that supercharged the breeze, kicking up dust as we slipped back into our waders. We grabbed rods and hiked down to the river, squinting into the sun sparkled surface of Slough Creek. Again, low water conditions presented a challenge, but we rose a few fish, then my phone rang.

Having switched off all chances of communication, I was shocked to be taking a call knee-deep in this fabled Trout stream. The voice on the other end was my favorite angling/political cartoonist, Jack Ohman, now a resident of California, where he illustrates the political silliness of the state where Grizzly bears only exist on the state flag. With 10.2 ounces of extremely potent Bear Spray strapped to my hip, at that moment, I felt better equipped for his day job, while he would have loved to be in my boots. The pen may be mightier than the sword, but Bear Spray will clear a room in a hurry. I told him I was in a meeting with some Trout, and we signed off with a promise to catch up the next time he could get a travel visa to visit Oregon without parental supervision.

Once my phone was clicked back to "airplane mode," I worked the edges and cut banks until the freshening breeze made my Sweetgrass Bamboo 4wt. rod ineffective. We retreated back to the 4Runner, slipped out of our waders, then headed to the Madison Campground for the night. Dinner was warm soup and toasted sandwiches before climbing the ladder to bed.

Temperatures dipped into the teens overnight, and we awoke to the sound of elk bugling and the West Yellowstone traffic jam. The elk weren't a bother, but the noise of trucks and cars rushing to see them was annoying. Our suggestion is if you plan on tent camping, pass on the Madison Campground in Yellowstone. The proximity to West Yellowstone is handy, but find somewhere off the beaten path unless you have a van, trailer, or RV. You'll sleep better.

The morning's highlight was the visiting elk that came to see my coffee-making skills while foraging for mushrooms at the base of the trees in camp. It was clear that mom was teaching offspring the techniques required for unearthing the tasty fungi. If a calf wandered too far from its mother, a scolding whistle brought them running. Campers in nearby ground tents must have worried about being trampled by stampeding elk, reevaluating the benefits of rooftop tents.

We broke camp, tossing our frozen boots on the floorboard to thaw, then headed for the Yellowstone River. We had hoped to grab sustenance at Canyon but found only groceries available for non-guests. Another tip if you're planning to visit the park in the near future, bring food and some way to prepare it. Food services are limited while Covid protocols are in place. You can restock at most locations in the park, but ordering a meal is more problematic. As the 4Runner is basically a kitchen on wheels, I made a hot oatmeal breakfast in the parking lot before continuing our drive.

The Yellowstone River is the biggest river in the park and the one I was most looking forward to fishing. On a previous trip, I had watched a park crew electro-shocking to monitor Cutthroat populations and had observed some monster Cuttys being netted and released. So I thought the Yellowstone would be a perfect river to perfect my Trout Spey techniques and knew Jennifer would be all over that concept. We had promised ourselves to ALWAYS pack a Trout Spey rod on these adventures and had both chosen 4wt rods, perfect for the river and, hopefully, the fish residing there.

Satellite images and written accounts helped me choose the location of our first stop on the Yellowstone, just downstream from the lake. As it turned out, a rolled RV on the road behind us made it our only stop of the day. No matter, the blocked highway kept it relatively private, and there was plenty of water to explore. After that, it was just a matter of cracking the code and finding fish.

We started with our 5-weight single-hand rods, casting the dry flies that had been so productive on the Lamar and Soda Butte. Then, after failing to raise a fish, we retreated to the 4Runner for a hot lunch and to regroup. Finally, out came the Trout Speys, and we set off with a new focus. Jennifer was sticking with a Scandi line and lighter flies while I tossed weighted sculpins on a Skagit with a 5-foot sink-tip. We slowly worked our way downriver, with Jennfier fording the stream to fish the opposite bank.

Steelhead anglers are a special breed, fully satisfied to endure hours of casting, cold toes, and fingers without even the hint of a fish in the river. These hard-earned attributes made the task at hand seem like a summer vacation for both of us as our toes were toasty and our fingers quite warm. The scenery was spectacular, and while fluffy clouds blocked the sun most of the time, there wasn't a hint of rain.

We covered the water thoroughly, with nothing to show for it until I reached the inside bend of the river. Then, as my sculpin came into the swing, I started to strip it with enticing movements to hopefully bring a response. Suddenly all hell broke loose as a steelhead-sized Cutthroat climbed on and lit up my Hardy reel, leaping clear of the icy clear water while jumpstarting my adrenaline. I echoed a loud whistle off the far hillside to let Jennifer know I was attached to a fish, and at that moment, she came tight to a fish of her own. We each brought a beautiful Yellowstone Cutthroat to hand on opposite banks at nearly the same time for a few photos before releasing them.

Buoyed by success, we fished on into the evening without any further encounters, a Bull Elk bugling taps on the hillside as the sun slipped from the sky. We returned to camp satisfied and exhausted from a full day on the water. Again, we climbed the ladder to bed, falling asleep to the howls of wolves and the rumble of steam escaping from the center of the earth.

Another chilly morning greeted us, and again our elk friends joined us for breakfast. Soon the tent was tucked away, and we were headed to a favorite spot on the Madison River to see if the big fish were moving up from the lake. We fished through a few pools but found the foot traffic more than we wanted to deal with, so we headed into West Yellowstone for groceries, an authentic Mexican food lunch, and an ice cream Sunday. Then, a quick stop at Big Sky Anglers for a few flies (like we needed more flies) before heading back into the park. Fully fueled, we were now prepared to tackle the Gibbon River for the rest of the day and late into the evening.

The Gibbon River is one of my favorite streams in Yellowstone Park but doesn't get the press that the Yellowstone, Madison, Firehole, Lamar, or Slough Creek do. It just kind of flows along through forest and meadow, waiting for someone to cast a fly and discover the treasures hidden in its chilly waters. Over the years, I have caught Rainbows, Browns, and Cutthroat in one favorite stretch of water, while Bison graze a short distance away. Grayling are said to inhabit the Gibbon, and one day I hope to catch one, but they have eluded me so far.

We decided to explore above Gibbon Falls this year, so we headed upstream to the meadow area. Here the Gibbon resembles a spring creek as it flows from forest to meadow, past steam vents and resting Bison. Here the fish are spooky and dart away from heavy footfalls. Stealth and sharp eyes are the keys to success, as is a healthy dose of patience. Jennifer has all those attributes and slipped into the water above a downed tree to target a skittish Cutthroat residing in the deep cover. Finally, the Cutty was no match for her cunning and fell prey to a well-placed dry fly and was pulled from his tangled home. While embarrassed, he only suffered being carefully photographed and released, no worse for the encounter.

We had one spot below the falls that we wanted to explore, so we headed that way to finish off the day. Now in a perfect world, we would have had a few hours to fish a beautifully forested section of the Gibbon, but a bear screwed that up. At least the rumor of a bear did. Traffic stopped, and tourists abandoned their vehicles in the middle of the road to get lousy, out-of-focus snapshots of a fuzzy bear that was barely recognizable as such. We waited in the "bear jam" until the offending critter disappeared into the woods, and traffic began to flow once again.

Finally, we arrived at our destination with only a few minutes of daylight left but discovered a section of river we must return to on our next visit. Deep pools, enticing riffles, and grassy banks were a Trout chasers dreamscape, but the light was fading fast. We cast until darkness dropped the curtain on the day then hiked back to the 4runner. Slipping out of our waders again, we headed to the Snow Lodge Cabins at Old Faithfull and the warm shower we had been looking forward to for the past three days. Camping is great, but a soft bed, clean sheets, and hot water aren't bad either. Besides, we'd be back in the Dusty Road Hotel the following evening in Gros Ventre in Jackson Hole.

Next week, I'll recount our adventures on Flat Creek in the National Elk Preserve in Jackson Hole and on the Snake River in Grand Teton Nation Park...see you then!