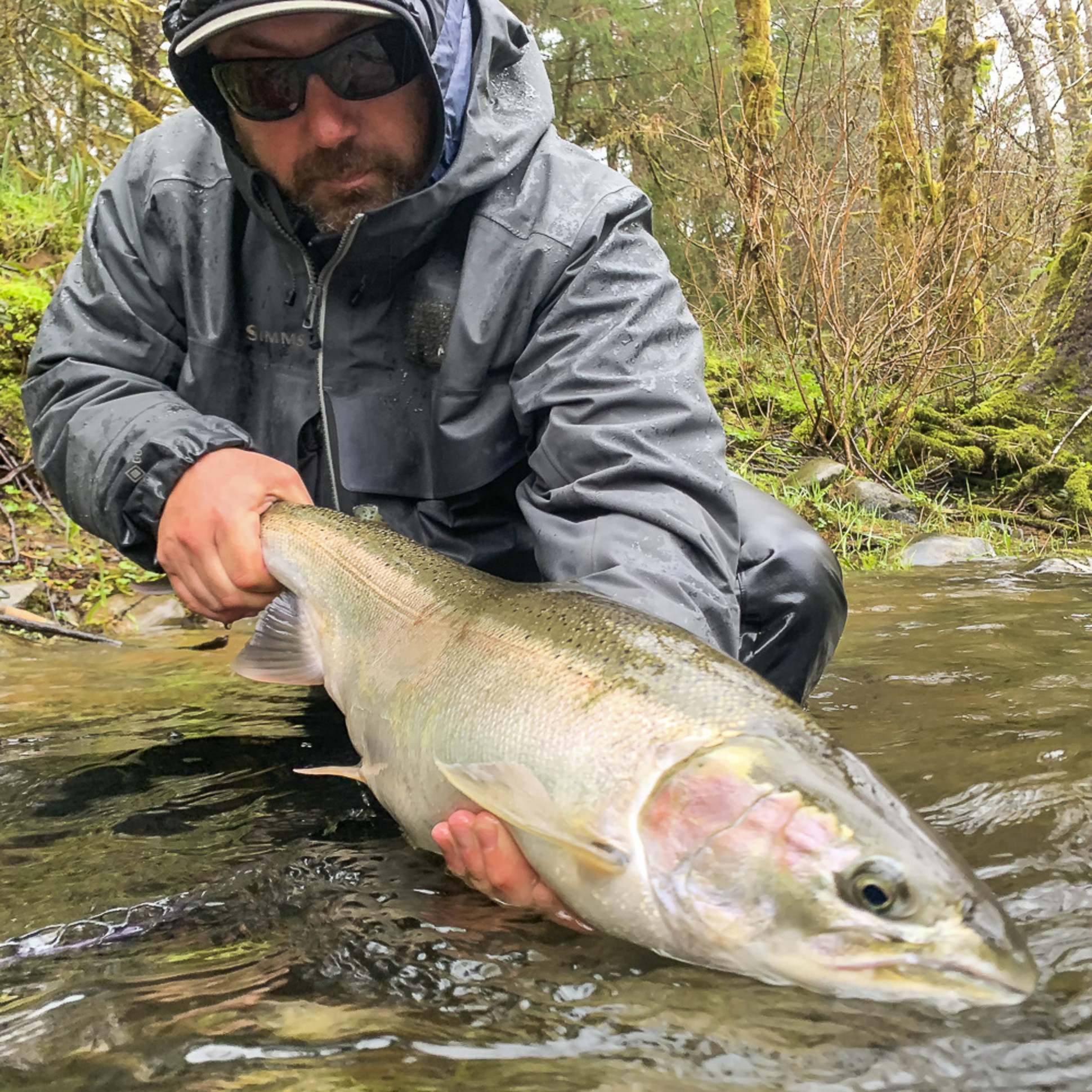 Steelheading is not for the faint of heart; it takes conviction; it’s not a fly-by-night program where you pick up a Spey rod, and magically you catch a fish. I caught my first steelhead in 1998 and have landed many since then. When I started, there were many guys telling stories of steelhead fishing for 20 years and never catching one. The late ’90s was the tail end of the dark days of steelhead fishing. Fish returns were at all-time lows and had been for a while, but things started to look up. After quite a few years, we are now heading back to the bottom, to the dark ages. These next few years will test your conviction, your metal, we will find out if you are a right fit for this special club. This last summer and current winter are the toughest I’ve endured, but you keep going, play the lottery, and eventually, you will get a winning ticket.

Now, all that being said, I’m pretty much excited to go out at every opportunity, and this last weekend was no different. I had plans for an annual trip to the coast, where I would meet up and fish somewhere different each day. In the shop on Saturday, Joel mentioned it was going to rain, so I looked at the weather forecast, and I noticed some weird weather warning. I clicked on it, and it said there was a Gail force warning, and it was calling for a 1/2” of rain. Oh lord, that’s not good! Well, I show Randy the forecast, and him being the wise sage that he is, told me it would be fine. The winds won’t make it that far up the canyon. Well, that was all I needed to hear; game on!

We met up at 6:30am to get the boat in the water early, hopefully before any heavy weather rolled in. The morning started out well; it was kind of balmy, with just a light mist. Perfect for steelhead fishing. This season we’ve been getting a fish about every three days, and this was day three, so I had high expectations. I have spent a lot of time on the water with my two fishing companions. Eric and I have been to BC and pretty much any other steelhead spot in the PNW, and I’ve seen Eric catch 100 Steelhead, but he’s never landed a winter fish.

We pulled into the first stop, and Eric and Larry hopped out. It was a huge tail out with a creek coming in on the other side. I have caught several fish in this run, and it was a great place to start the day. We all three fished through with not even a sniff. Strike 1

We rolled into the second run, I can’t remember caring a fish in it, but I know it’s a good one. There is a ledge that your fishing from into a big broad tail out. Eric hopped out of the boat, and Larry and I sat there telling fish stories. Eric fished deep onto the tail and again nothing. I floated down and picked him up. Strike 2

By the time we got to the third run, the wind had started to gust, and heavy rains were intermittently falling. I know I’ve caught quite a few fish in this run. Larry hopped out, and Eric and I floated to the middle. I put Eric in, and I sat in the boat until he was far enough down I could fish in behind him. I stepped in, and about the time I made my fifth cast, I can see that something is happening with Eric. I can see him coaxing the fish to eat his fly. All of a sudden, he sets the hook, and it’s on. A black and white missile comes flying out of the water. Wahoo! Fish on!!!! I reel up and go running down to Eric and jump on him in excitement mid-battle. Yeah, buddy, this has been a long time coming!!! Eric lands his first winter Steelhead; there are a round of high fives and possibly a toast or two.

We move on to the next run, and we eat a bite of lunch. We finish up, and the wind is now steady and strong with the rain coming down horizontally. We call it a day, and I push it straight out, straight into a headwind and horizontal rain for the next four miles. I love winter steelheading; I coined the phrase “a two raincoat day”. I like being in my personal environment, all bundled up in my raincoat and hood. But by the time I got to the take-out, I was soaked; I’m sure I looked like a drowned rat. I can’t explain how wet I was, but I’m going to try. I was so wet I could literally drink the standing water from my beard. I was so wet I was soaked all the way down to my underwear, and I was bundled up tight with just my face sticking out. It was a spectacle for sure. We parted ways. I needed to get home and dry out for my next fishing mission.

I met Todd from Water Time Outfitters for our annual guides day off fishing trip. We got on the water at first light. We slid into the first spot, and I told him today was gonna be the best day I’ve had all day, but my expectations were low. We had landed a little Chromer yesterday, so I had about two days to go before I touched another one...... The thing about playing the lottery is sometimes you get on a winning streak!

Now I would never promote gambling, but if you don’t play, you can’t win!! There’s still time to get a winter steelhead before the season is over, and I bet you’ve got the winning ticket.