We may have separated 243 years ago over taxation without representation, but we remain infatuated with our cousins across the pond. We import their leaky cars and waxed raincoats, wearing both as status symbols in-spite of their inadequacies. While we strayed in Americanizing football, we eventually came to love their version of the sport, but refuse to call it football. Warm beer never caught on, nor did many of the culinary delights from that island nation. We like our beer cold and our fish and chips hot. We share a language, more or less, but even that causes issues in polite company.Our fly of the week has its roots in England and carries across the pond that British sense of humor and understatement. One need only look at this fly to see how it came to be named. It is clear the originator found inspiration from a barmaid in a local pub as he drank warm beer and his Morris Minor leaked oil on the cobbles outside. This pattern may have started as a crude joke, but it has proven to be extremely effective. So much so that in some waterways in England this pattern is banned. As is the case with many good imported ideas, the Booby has caught on and adapted itself well as a deadly lake pattern here in the colonies. Fished on the strip while knotted to a sinking line, the Booby rises in the water buoyed by its suggestive flotation, enticing strikes from predatory Trout. It can be used in a two-fly rig as the trailing fly or fished solo. While Boobies come in many shapes and sizes, size 10 DD seems to be the most popular according to our lake master, Nick Wheeler. 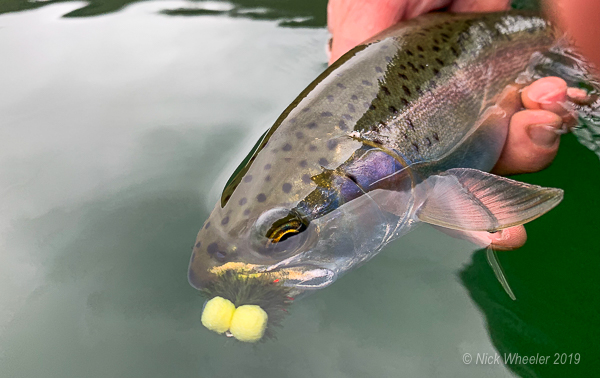