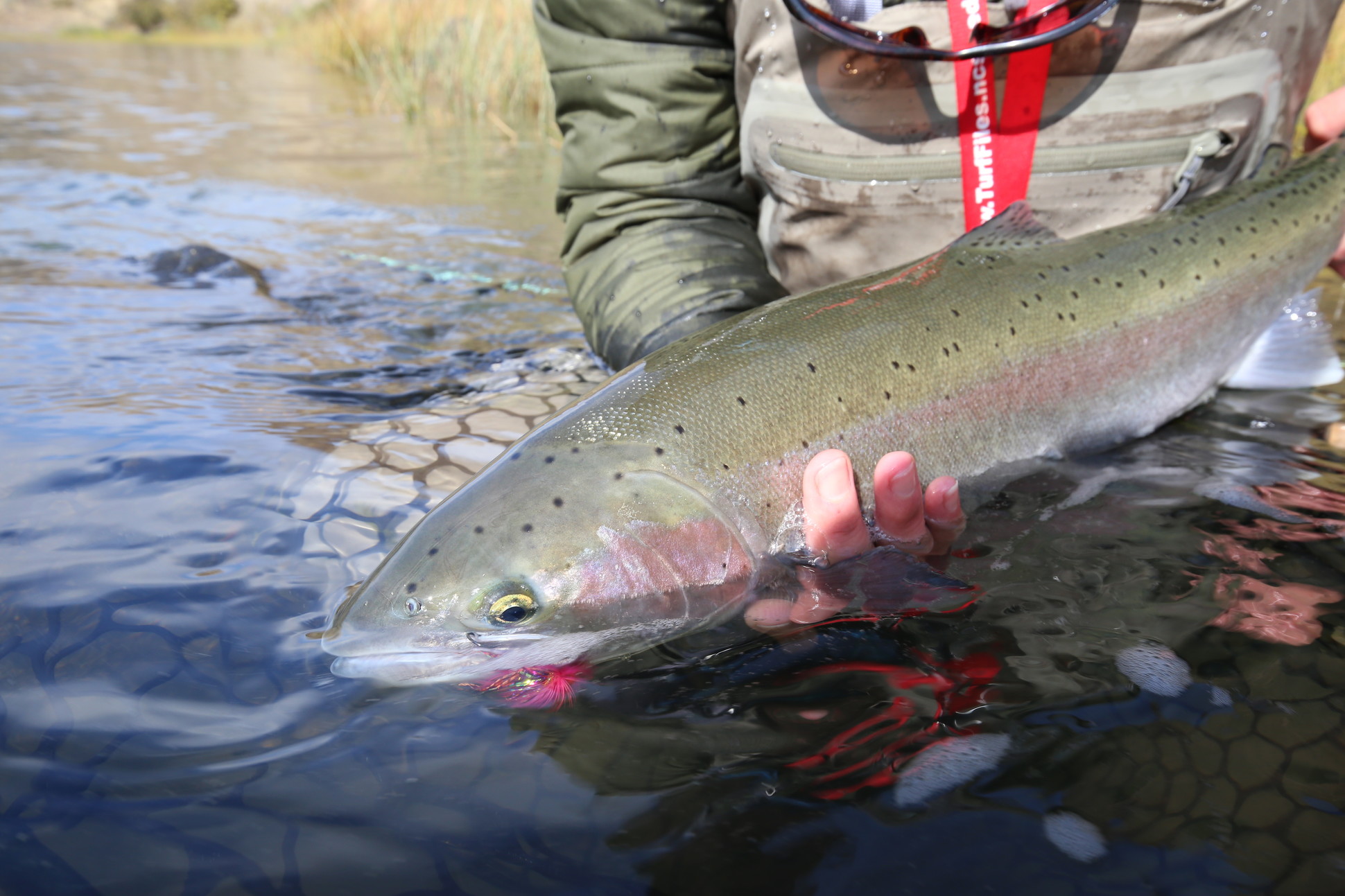 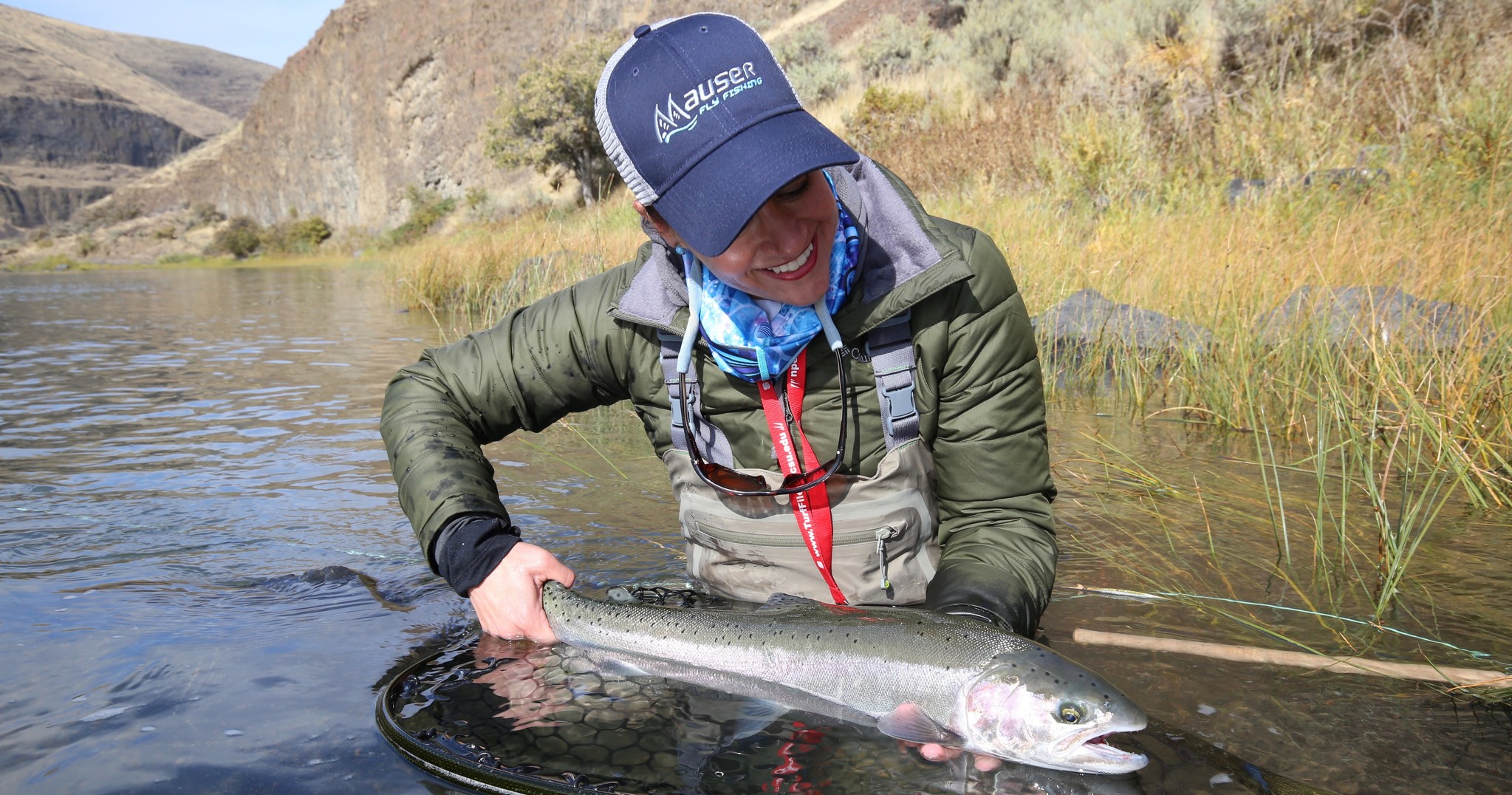 I get it now. I do, I get it now. The tug, then the tug again, then the tug BIG TIME and the other “oh that’s just a rock - wait, what? My line’s peeling off my reel downstream and there’s a fish jumping across from me..wha???” Still on cloud 9 and possibly still shaking from what has become some of the best days of my life with my crew out here. They have made everything about these days possible and I can’t thank them enough. Y’all are the best and thank you for giving me these memories I can take with me and cherish always. Good Coaching
2 landed, 1 self-released at net. 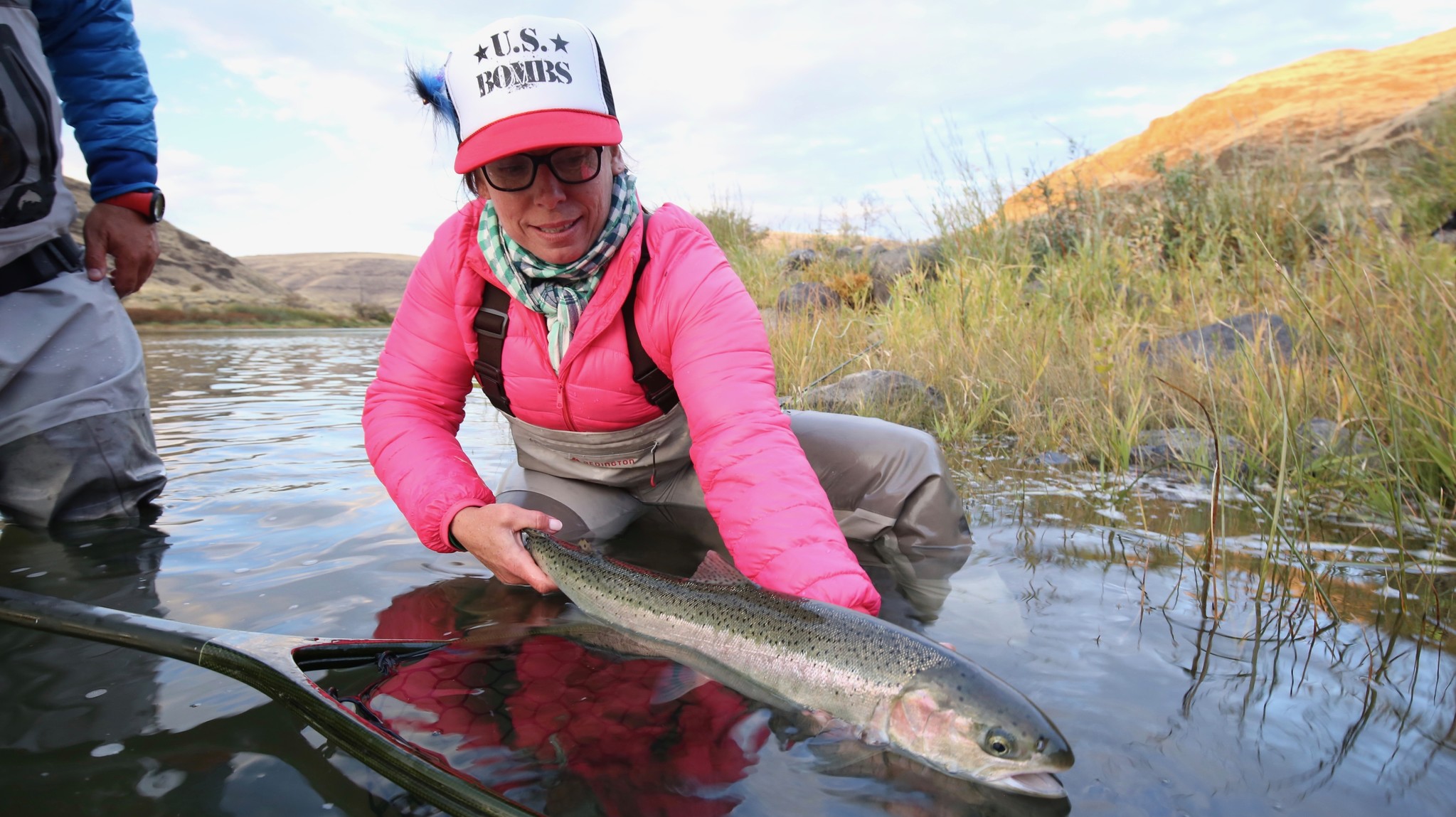 "I think I have a fishing problem…. Fairly "ok" day on the river, with fairly "ok" people, and a pretty decent small d.o.g. Saved all the best for last..1 landed and 2 self released Wild Steelhead at my feet. The biggest shout out to my fishwife @bugdoc_ for her first 2 LANDED Wild Summer Steelhead on the Swing. Too many laughs, a good swim, smack talk, cookies, hip hop history lessons, linguistics and a hideously bright pink $7 puffy from the Goodwill. Life is better than good."

Sunday October 13th, Operation Desert Storm commenced at 0400. This is a plan that had been hatched months ago. The team had been preparing and waiting for the day to arrive.

The strategy for getting our two Royal Treatment Fly Fishing Ambassador’s of Fun, Shandy and Callie, into some east side steelhead starts with a blitzkrieg maneuver. A quick 1 day attack and take no prisoners.

Step 1: The Secret to a Blitzkrieg is an early start. Sometimes the key to a successful trip can be beating everyone to the river and starting your float in the early morning hours, that way they don’t see you coming.

Step 2: The right gear. Any good operation needs effective equipment, and this time of year we can use multiple ways to catch steelhead, but when it comes to fall Josh and I both get down and dirty, fish sink tips and smaller winter sized flies, like a Klamath Intruder. (See last weeks newsletter for tying instructions.)

Step 3: Know your enemy. Finding steelhead can always be a problem, especially on low count years, but these fish are predictable, knowing or having someone with you that does makes a huge difference, that’s why there are fishing guides in the world. Luckily for our ambassadors on this float we had our attack all mapped out.

Step 4, Exit strategy. Always good to know how to get out, our exit plan always involves pizza and beer at Double Mountain Brewery in Hood River. It never goes wrong.

Operation Desert Storm went off without a hitch. The girls preformed flawlessly, both arrived early and prepared for battle. Soon into the first run Callie hooked into her first swung steelhead. With a very unassured “hey, hey, hey, something is happening”. Almost too quiet to hear but she was off to the races and then wasn’t quiet for very long. Unfortunately the fish popped off right next to her feet but luckily there was a lot more river to go. A few runs later she felt another strange tug at the end of the line. This fish decided to stay attached for the entire battle. Callie had landed her first swung steelhead, there were a lot of high fives, and tons of excitement. Most of the day continued with the same outcome for our group. Shandy, who recently got into her first steelhead last month ended up hooking into three right in a row showing off how easy these fish can sometimes be. All and all the group ended hooking a unbelievable amount and our blitzkrieg tactics seemed to work, especially the pizza and beer step.

Now if you ended up actually reading through that whole thing here is the fishing report that you were looking for. As you can tell steelhead on the east side has been rather good. There are reports of steelhead being caught through out the lower Deschutes but majority of fish are still from the Maupin area downstream. Trout fishing has been excellent on all of the east side creeks but the Metolius and Deschutes have been taking most of the glory. If your looking to stay a little more local the Clackamas and Sandy Rivers both have some Coho swimming about. Cloudy or rainy days seem to be the best so look forward to this storm that will be here this week, if we don’t get too much rain. Also lastly don’t forget about those Sea Run Cutthroat on the coast, we only have a few more weeks to fish for these guys so get after it while you can. These last few weeks of the season can be the very best, so why are you still reading this go fish.

The Ambassadors of fun
Be the first to comment...