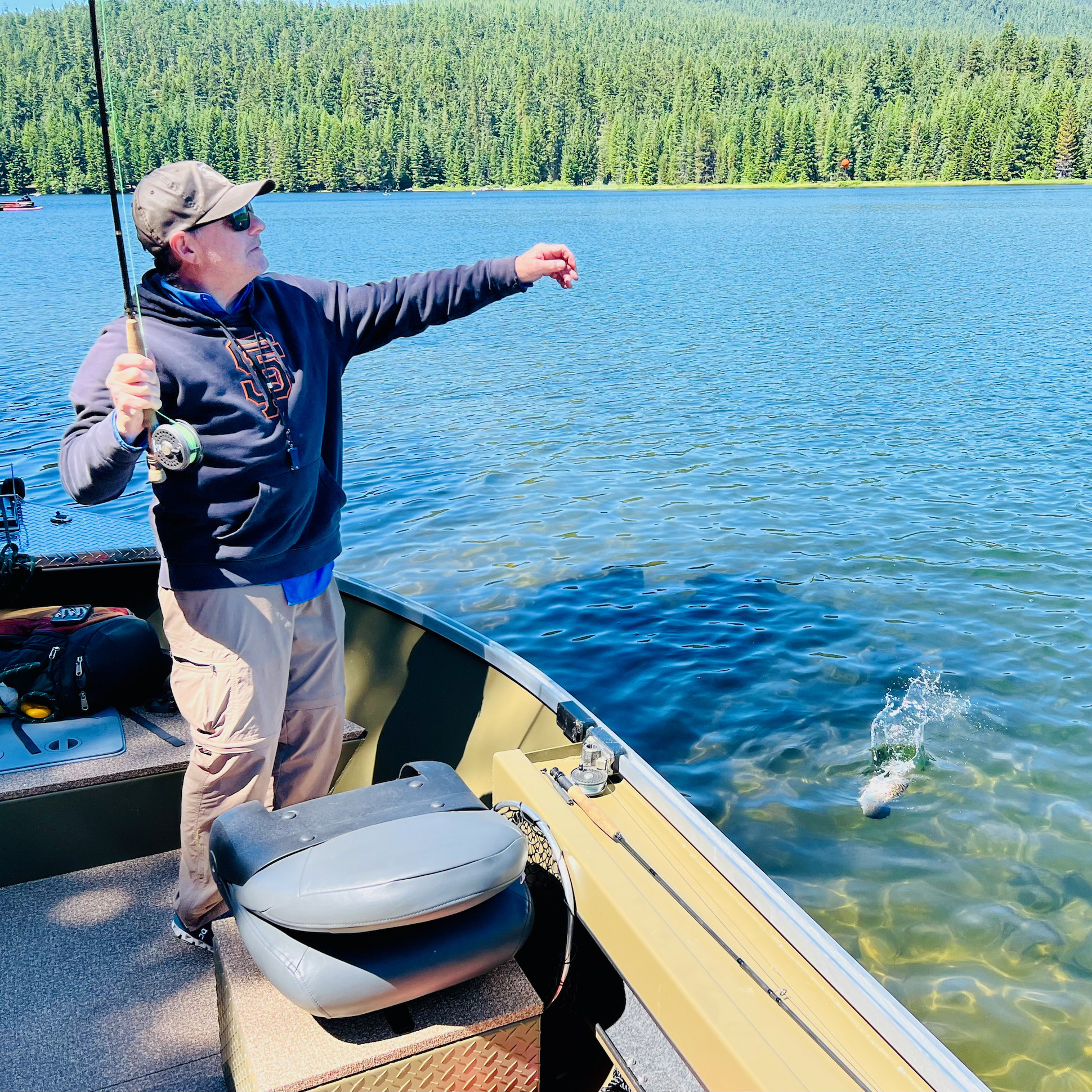 Sunday afternoon rolls around. It's been a productive day with chores being completed and new projects coming to mind. Pretty standard. Then I receive a text from Randy asking if I'd be interested in heading up to Timothy Lake tomorrow to do a little fishing. My day just got better. A day on the lake with Dr. Stetzer was sure to be full of learning and a load of fun.

My stillwater fishing experiences have been mostly in the high Sierra lakes where the solitude and splendor are the main attraction. Taking in the surrounding beauty but brought back to the moment with a tug on the line and bringing a nice fish to hand. Fishing from a boat on Timothy was going to be something new and I was super stoked.

With a touch of chill in the morning air, we slipped the boat into the water and we were off to the north arm of Timothy where Randy cruised us to a spot near one of the channels he spoke of. Rigging up rods with a floater and an intermediate, we eagerly started to make our offerings. After several fly changes, we started to hook fish using balanced leeches under an indicator. The wind gave a slight chop to the surface, offering the fish some cover and making them comfortable enough to continually hammer the balanced leeches hanging below the surface. The fish were strong and acrobatic and we were blessed with a splashy face wash upon their release. Conversely, as the wind would die down, the water became glassy and the fishing would grind to a halt. “We need some chop” Randy would comment. Switching to chironomids offered a few fish but the leeches were indeed the ticket of the day.

The bent rods didn’t go unnoticed. A couple of senior gentlemen trolling nearby with conventional gear inquired what “lures” we were using. Randy offered them to cruise over and gave them some olive and black wooly buggers. After graciously helping them with their setups and offering a few tips, the two set off back to the channel. Back and forth they slowly cruised, hooking fish and sporting big smiles. As the afternoon came around, the gentleman brought in their lines and stowed their gear. As they headed out, we got waves and a hearty “Thanks for the lures”. So great.

We hung around for a while longer hooking an occasional fish but decided to bring it in and head back. It was an incredible day. The company. The conversation. The splendor. The quiet... I left with two thoughts buzzing thru my head. Learn to tye the balanced leech, and I think I need a boat. Thanks Randy!