Our special guest this week is the one and only, Peter Alandt ...

I didn’t get out much this past fall. Between an anniversary trip, the school district’s numerous holidays, and applying for graduate school, it just wasn’t in the cards. A couple late summer Deschutes fish had held me over during a less than ideal fall. Then the weather the past couple weeks! I still hadn’t bought a license yet.

On Tuesday, I was going a little stir crazy so I bucked up, bought my license and decided to take my chances with a falling river. I loaded up and prepared for the unknown. It was a late start but it had rained and grappled and now the sun was shining. I slipped into my waders and boots (felts suck in the mud, btw) and headed to a familiar run. Luck was on my side as no one was there despite vehicles in the lot. Tied on a Provider and started working my way down. Half way through the run a couple gear guys come into the bottom of the run and decided to fish the bottom and I roll with it.

After my first couple experiences with steelhead, I’m treating every leaf and twig like a potential run and keeping my finger off the trigger. Initially it was counter-intuitive but I’m looking for new material to be ridiculed about. I get to the bottom of the run (which I’m not really sure of) and I start guessing how much light I have left. I definitely don’t want to walk to the truck in the dark.

I figure I can make another pass so I cut off the Provider and tie on a mini-intruder that I have confidence in. Okay, I’ll call BS, I like the way it looks. I don’t have enough experience to “have confidence in a fly.” But I tie this fly on and start swinging. Still, every leaf and twig that takes line, I let it go until it stops. Then, it happened. About two-thirds of the way through the run, the line doesn’t stop!

I’m not entirely sure it’s not a sucker fish for a second but then I see it! Big splash and more line and I’m stoked. Let it run, then reel, then run and I’m moving down to it when all of a sudden it stops. There is no pull and I can’t get any more line in. So I move downstream because I figure that the fish has spit the hook and I’ve gotten hung up. I decide to try to break it off when it dawns on me that I can’t see my head. I’m not excited about replacing another head so I start moving out to the snag when it comes free and the fish surges upstream a good ten feet upstream of the snag.

I continue to play it and I am not making much progress. So I use a tested technique that helps me. Well, I like to call Josh in the middle of these battles. Ask him about it. It seems to work for me when it comes to landing fish. Two things are running through my mind: “hold the tail like Crandall said to” and “if you don’t get a picture, you’ll have no proof”.

I am hell bent and so is my rod.

Landing steelhead alone isn’t easy when you don’t have much experience. Well, I managed and I got the picture to prove it. And it was a fine day! 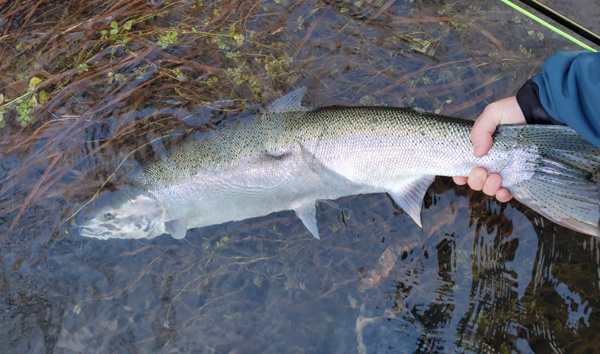