The boys take the Merman to the Deschutes and things get interesting...

While Joel was away tending to fly-fishing industry business, Nick and I had to do all the heavy lifting here on the home front. So to help Joel with this newsletter we offered to go fishing and see what kind of trouble we could get into. I'm not sure if you read my Instagram post or not but this is the story of Drag Queens, Flying Fish, and Back Eddy Swims. The Warm Springs stretch of the Deschutes opened last Monday, but the river was running high so we opted to go our separate ways. This week, the river dropped so we planned an outing to go float that upper stretch. Nick, Jeremy, and I met up early for the trip over. Jeremy hadn’t fished this stretch before so we were going to break him in right. The river had bumped up a little overnight. We pushed out to the island at the upper boat launch and immediately could see the holding spots were smaller and the water was moving faster. It also had a greener tint than usual, but it was still very fishable. We pulled into our first spot and had pretty good success. Most of the fish were tight to the bank, basically right at our feet. On our way down to our next spot, I pulled out a fly I had tied the night before. It was a fly I was fairly ashamed of. It was a Frenchie with a hot pink tail, bright pink collar, and a pink bead. Every time I looked at it all I could think was that it was a Frenchie in drag. I showed it to Nick and told him I had been calling it the Drag Queen. He laughed and agreed. I had been fishing a fly very similar to it with good success so I thought I would give this a try. If I thought the other version had worked, this thing was unreal. I was contemplating cutting it off as it was the only one I tied and I didn’t want to lose it, but I didn’t. What good is a magic bullet if you’re afraid to pull the trigger? 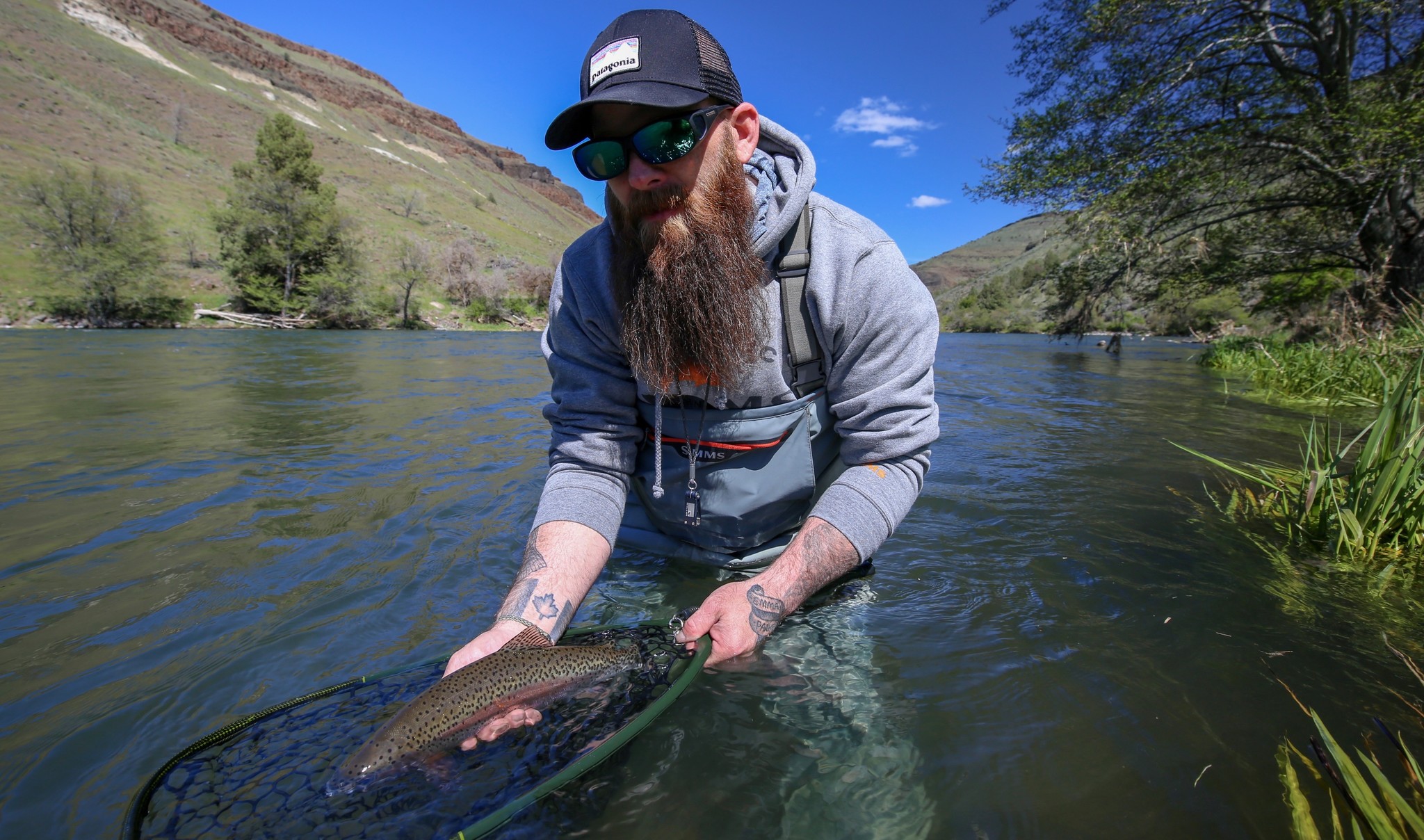 We pushed down to our third spot. A long cut bank with a big back eddy at the bottom. We spread out and started working the back. Nick got adventurous and worked his way around the big Eddy at the bottom. We all caught a few fish and for the second time in recent weeks I hooked up a double. A fish on either fly. This has never really happened to me until I really started fishing the Euro Technique. I was having a hard time managing the two fish in the heavy current and broke one off while I was landing them. I was a little concerned because I thought I might have broken off the Drag Queen! I checked, and it was safe so this time I did cut it off. At that moment I heard quite a commotion down river. Apparently, Nick decided to take a swim as he was crossing back and fell in up to his neck. He was soaked! Nick was wet enough that he needed to get out of his waders and wet clothes to dry off.The morning was turning to noon, and it was time to get moving. We floated down to one of my favorite islands and parked. The water was rolling over a lot of the island so wading was a bit of a challenge. There is a big soft spot at the bottom and Jeremy and I worked our way down. We both caught fish. I was getting into a pretty good groove, casting and catching. At one point I had a take almost right at my feet, I set the hook (apparently a little too hard) and the fish came flying out of the water straight at me. I dodged the fish, and it went flying at Jeremy. It was a small hatchery steelhead smolt about 3” long. Jeremy was pretty surprised when he saw the fish flying at him, I think he thought I threw it at him. By the end of the day, we had lost count of the fish we caught and honestly the quantity was unimportant. We couldn’t stop laughing and we got to show one of our good friends one of our favorite pieces of water.