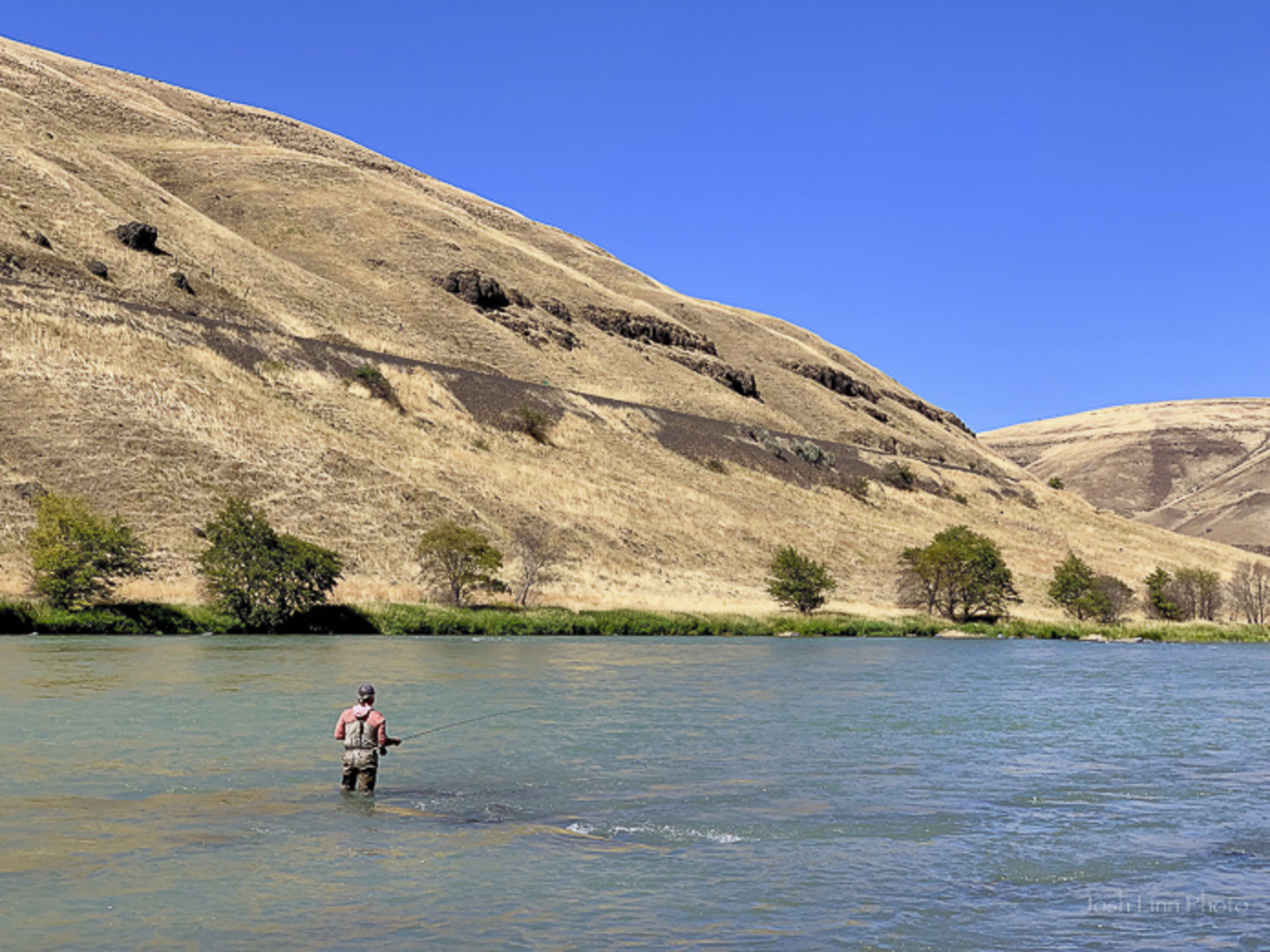 So, I come to the shop on Saturday to head out and Josh gets a photo report that the White River has blown out the Deschutes. In true Josh fashion, he says "we’re going anyway" and I was down with that. I’ve spent the summer with my eight-year-old. I needed some time on the water. Sure enough, the White was muddling the river but we were determined to make the best of it. We put on in whitecaps and went looking for a site for the night.Good stories were swapped, not too many lies were told and the Milky Way touched the North and South horizons. The camp was eventually set and we attempted to make the best of the blown-out river. It’s wise to have a measuring device if you’re out of practice bartending.With the river being blown, I opted for going big then spent the better part of Sunday resting in the shade. It had been too long since I day-napped on a river.I’m a steelhead virgin and Josh hadn’t lit a fire to this point. So when Josh suddenly says, “Get your waders on, let’s go fish,” I wasn’t sure if he was messing with me. Let me tell you, it was like someone pulled the fire alarm. Horizontal to vertical and hustling.Downriver we go flushing pheasant, counting sheep on the ridge and watching deer enjoy one last moment of peace. We pass a couple scouting their fall hunt and Josh gives me the go-ahead to start fishing the top of the run while Eric took the bottom.Wading the Deschutes at dusk. Not my favorite but I can recommend a pro heckler to improve your confidence. I was so focused on my feet and my casting that when I had my first grab, I went straight to my southern instincts and clamped down on my line to keep the Redfish out of the weeds. According to Josh, my expression was one of sheer terror and the fish was off. We had a quick convo about fighting steelhead vs GTs. I admitted my ignorance.Finished out the run without another grab before heading back for dinner and an earlier evening. The river looked to be clearing and we made serious plans for the last day.Up before light, we quickly broke camp before checking the river. Good thing cuz the river was blown out again. We loaded up and contemplated pizza for lunch.Eric and I were game for whatever, so downstream we went.Quick shout-out to Phoenix Outhouses and the people that keep them up. You need a tip box for that luxury.We came to fish so Josh decided to put me through the motions after the previous evening’s episode. So, we fished. And my comfort and confidence shot up. I learned it is mostly well-placed encouragement with a dash of experience that increases another’s confidence. It’s amazing to watch and even better to receive.I wasn’t aware it was the last run when I went the last time or that the expectations were probably high. I figured it was a nice bit of shade for the boat and more exposure, maybe a chance to take a dip.I’m working my way down, enjoying my wade, casting and the swing. Still in the top, I have my second grab. I let the fish run. I AM teachable. I start working it back to the shallows to land the fish and it comes unhooked. I’m a little shell-shocked. Josh yells, "KEEP FISHING!” And I go back into it. Two more casts. Bam! Another fish! All three of us are perked up. Josh and Eric are hootin’ and hollering. I’m quiet but determined. I work it back to the shallows and bring it to hand after 3 or 4 runs. I forgot my hair and makeup crew so while Eric was fumbling with that and Josh was checking the lighting, the steelhead remembered a pressing engagement and took off. Much subdued excitement was expressed on my part and we fished a bit longer before heading for customary pizza. I may need some more experience handling fish for pictures but it’s the mental one that really counts. It was a very memorable and enjoyable experience...and school starts next week.