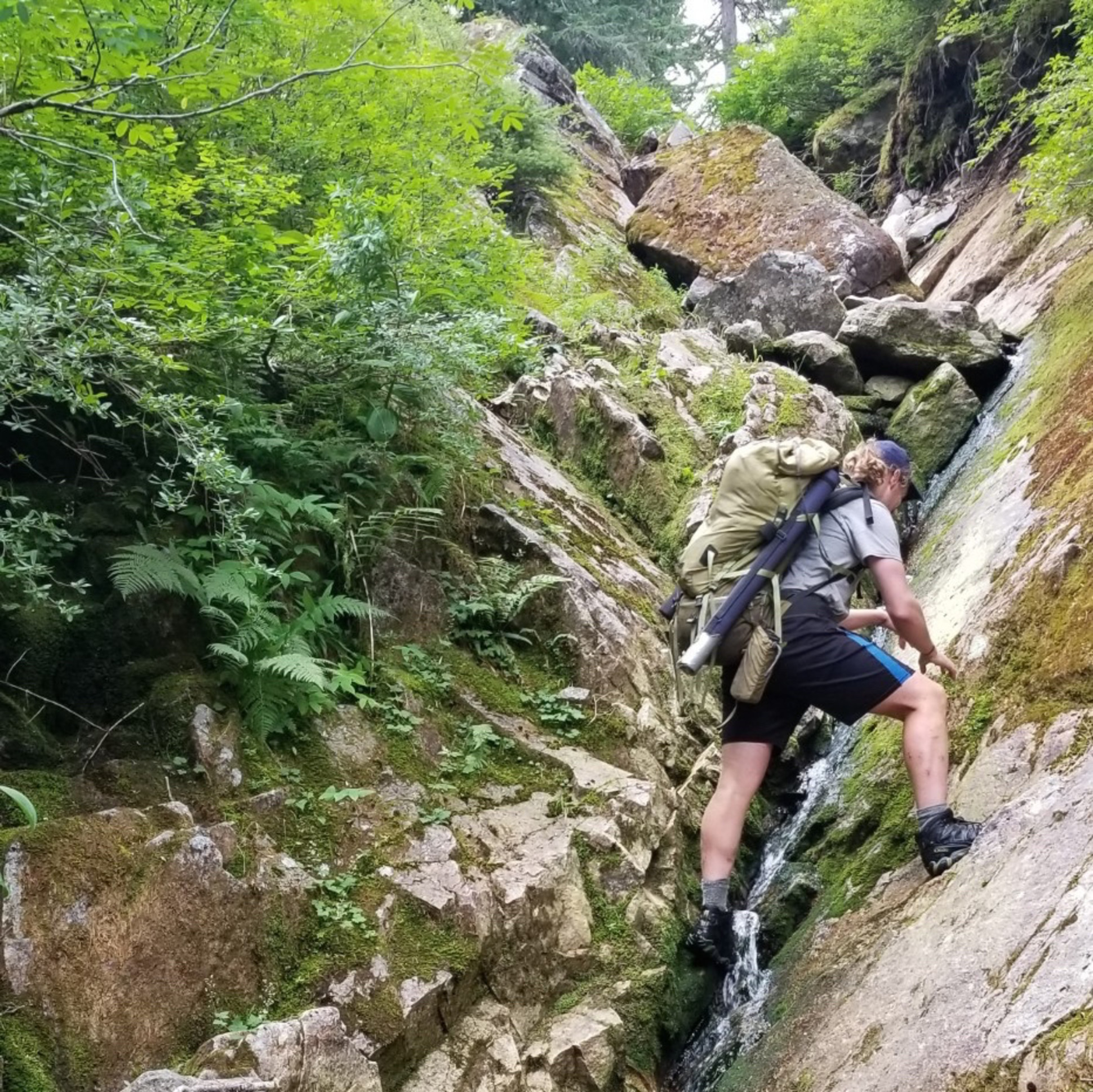 4 days. 18 miles. 11,025 feet of elevation gain. 13 lakes. 0 trails. Those numbers are the reason you missed me in the shop last week. My mom and I have done at least one major backpacking trip together every year since 5th grade. My dad and brother attended the early trips, but their interest slowly waned, and absences increased. Only Mom and I push the tradition forward now. We’ve been canyoneering through the red rock gulches and high mountains of the desert Southwest. We’ve delved into the dark, rich forests of the coastal Pacific. There was a week spent scaling waterfalls and swimming backpacks around contorting and spectacular headlands in Hawaii. But we’ve spent far more time in the Central and Northern Cascades, particularly the Alpine Lakes Wilderness Area, than anywhere else. It was the location of my first backpacking trip and the familiar haunt that Mom and I returned to last week.

Allow me to break down the numbers I began with. 4 days is not a long trip. 18 miles is short. But 11,025 feet of elevation gain far exceeds the bounds of ‘pleasant’. The hike was out and back so everything we went up we came back down. Functionally we gained 11,025 feet in a piecemeal 9 miles and descended 11,025 feet in the other 9-mile collage. For perspective, summiting Mt. Rainer requires an elevation gain of around 9,000 feet over 8 or more miles. The reward for our effort was priceless.

Seeing 13 lakes, clustered in a small area, is normal for the Alpine Lakes Wilderness. The region is stuffed with places where upwards of a dozen lakes can be visited on a four-day trip. A lack of trails is also normal. The Alpine Lakes Wilderness, being near Seattle, is well-traveled. But it's also huge and only requires a little research to find seclusion and untrodden places. I am proud that I did this hike. But I’m 24, I shouldn't toot my own horn too much. Thousands of people summit Mt. Rainer every summer. For my mom, Victoria, this trip was an incredible achievement.

The morning we started was 20 days out from her 60th birthday. A huge majority of Americans could not have done this trip at my age. She carried a 35-pound pack. Less than a year ago she beat cancer. Though the miles and days were few, each of those miles almost could not have been harder. My mom is both the most amazing and toughest person I know. She is a gifted athlete and combines this with a work ethic like no other I've witnessed. I work with Randy Stetzer so that is saying a lot. She was one of the first 20 women in the US of A to ever become a firefighter. Her physical, mental, and emotional strength allowed her to revel in the outdoors, and that joy bled into me. She had me trawling my fingers through the neighborhood pond, hunting for frogs, by the age of three. I am so grateful for the life she has enabled me to lead and that we can still have experiences like this together; even if I have to hike a little slower now or pick a little less ‘adventurous’ routes than I did before.

But I am sure most of you want to hear fishing stories and not the gushing of a mama’s boy. Of the 13 lakes we visited, I had only previously laid eyes on two of them. But I had a suspicion the area might fish beautifully. The least accessible places often do. When the Cascades lakes were originally stocked, long ago, a group called the Washington Trail Blazers intentionally put better fish in hard-to-reach locations. These particular lakes are so demanding to access I can’t imagine that many more than a dozen people fish them, or even see them, per year. As we crested an early ridge, the burn in my lungs and ache in my thighs was washed away by the sight of fish rising below, visible from half a mile away.

High elevation trout can get much pickier than people realize. And I would love to talk about my numerous theories on such fish if you come in and ask! But last week the fish were eager for two things: micro-zonker leeches and terrestrials. Fishing in the sunshine, during the day, was soul-refreshing. I was primarily blind casting leeches and stripping them erratically back to shore. My mind and stresses from my regular life were pulled from me, out across the lake into a whirlpool of mountain scenery. I was lulled by the rhythm of laying out my line into crystalline water. But I rarely drifted away for long before a hard stop of my line would suck me back into a reptilian-brained bodily excitement, pulling a plug in the bathtub. These fish, bulky from a summer-long overeating binge, were not playing. As soon as they grabbed the leech they would turn and pull hard for deep water. I soon switched to my three weight, for added tippet protection, and downsized to a 3x tippet. I lost multiple fish early on because the ferocity of the takes shocked the system more than a 5x tippet and a five-weight rod could handle.

The most exciting fishing was in the mornings and evenings. Mountain trout are always cruising their lakes' shorelines. But in the golden light of dawn and dusk, these fish moved into the very shallow water around the inflows and outflows of the lakes. I would put on a hopper pattern and begin to headhunt; watching from a rock or log until I spotted a fish or a rise. The fish were actively hunting, eager to pack on the shot of protein that my terrestrial represented. Better yet, they were clumped together, and thus competitive; racing to take the fly from each other when they might have otherwise examined it more closely. Fish consistently skyed, sometimes carrying the hopper a couple of feet out of the water with reckless, thrashing, takes. I watched one large trout try to thieve the fly from the mouth of a smaller fish I had already been playing for a minute. But the crowning jewel was a pair of 20-inch fish I pulled from a lake small enough to circumnavigate in 5 or 10 minutes. I'll tell you the story of one of them.

I was hopper fishing from a log jam, targeting fish 15 to 45 feet in front of me as they patrolled the debris-strewn bottom. What sounded like a baseball hitting the water directly below my feet interrupted my fanatical staring and jolted me back to an awareness of my periphery. I was immediately afraid that my shorts pocket had sacrificed my phone to the lake. Instead, I saw a 20-inch monster slip back down to the organic detritus of the bottom. It was in no more than 8 inches of water and within a single rod length of me. It continued a slow perusal of the shoreline, languorously confident in its size and dominion over its territory. Its lack of fear towards me hinted at a fish that had never been caught, that had earned its spot at the apex of this small lake’s ecosystem, and possibly had never seen a human. Its great bulk disturbed the surface as it swam.

The self-control required to keep my movements slow and retrieve my fly smoothly, so as not to spook the fish, battled with my rising adrenaline. Making a cast shorter than the length of my rod is a problem I have rarely negotiated before. I muddled through. But I suspect little that I did, so long as I got the fly in the fish’s general direction, mattered. The magnificent bow hammered my hopper as soon as it touched the surface. I immediately had to put the heat on him in a desperate attempt to keep him out of the logs. He careened for the cover of a large stump with a deep shadow beneath it. I pushed the tippet harder than I normally would have dared and pulled his head up just enough to redirect him over the obstacle and send him rocketing past and into less hazardous water. The fight continued for several minutes as he repeatedly tried to jump and I tried to keep him down (hard side pressure), to prevent the barbless hook from being thrown. Finally, I skated him back, now docile, to momentarily admire his brilliant flanks, speckled back, and deep, broad, shoulders. I slipped the hook out and allowed him to swim away, still never having felt the touch of a human.

This trip has been logged amongst the memories I will never forget, along with all the other trips Mom and I have taken together. I will continue to adventure with her as long as she and I are both able. Though she is not a fisherman, my passion for fly fishing is rooted in the way she taught me to revel in the world. She catalyzed the pure happiness that this 20-inch mountain rainbow brought me. I would do this trip all by myself without hesitation. I can fish from dark to dark and not be ready to quit. But it was better because she was there for it. Few things make me happier than a chance to share our passion for the outdoors yet again. And as we both grow older, I carry the heavy pack up the mountain now. I enjoy the chance to do this. Young and stupid though I may be, I am mature enough that Victoria is no longer only mom. She is a person in her own right, not an ever-present, caretaking, extension of myself. Carrying the heavy pack lets me give back some of the passion she has been gifting me from that first moment in the mud, hunting frogs in the neighborhood pond.

Alpine LakesTrout
Fisher Munro
Be the first to comment...