Fisher Takes a Knife to a Gunfight 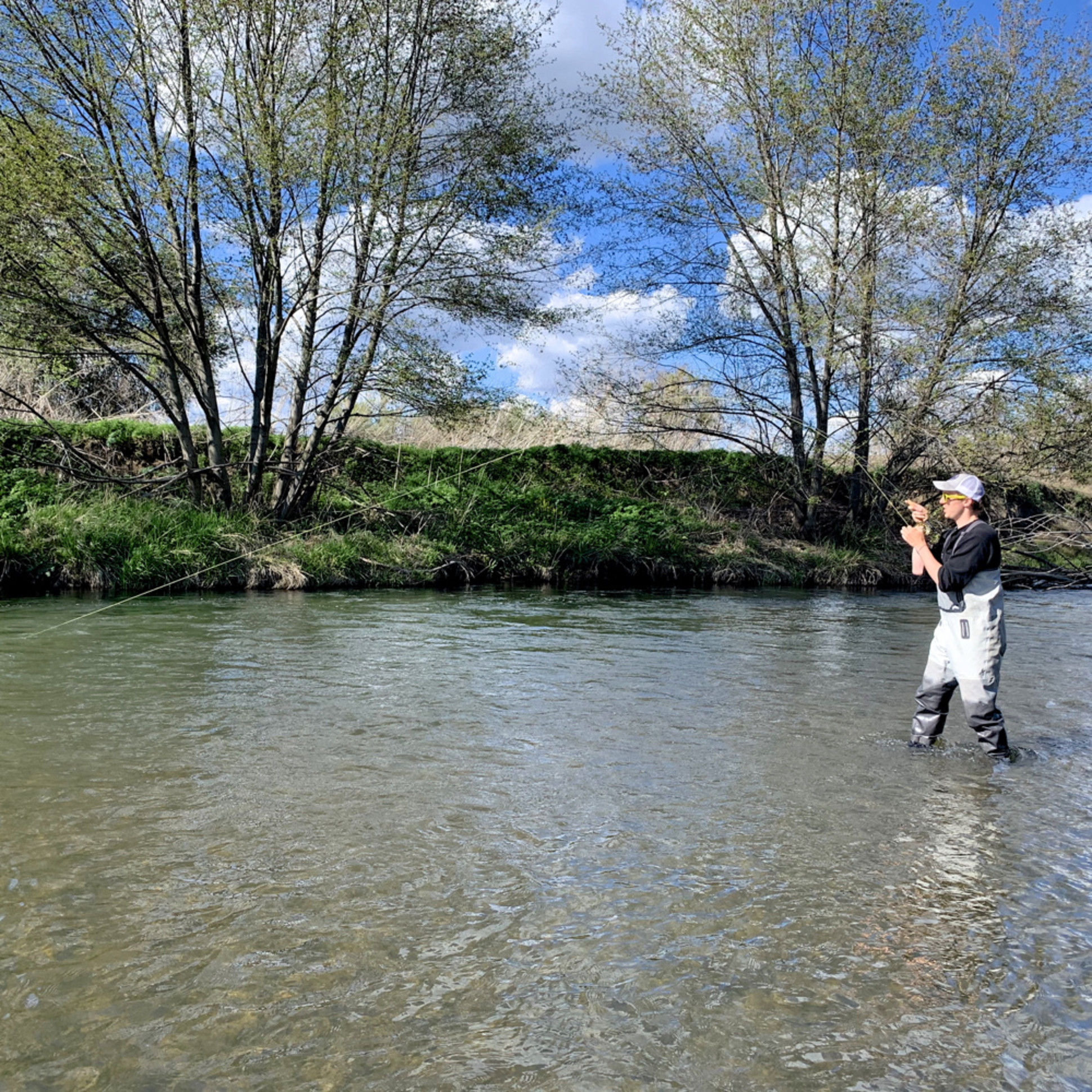 Last week I purchased a new three-weight rod, the Echo Boost, and a Hardy Ultraclick to accompany it. I bought it after the small creek fishing I had been doing; in anticipation of more. I’ve never owned a three-weight before, so I was excited to feel the bend even a tiny trout could put in it. Also, the Ultraclick is a click and pawl reel, which I have never used before. I was hoping to feel the strength of a trout in an even more direct way. I broke in this setup the very next day on one of the creeks I discovered last week.

It was a fantastic day. Nearly all off-trail, demanding that I climb down three separate waterfalls and earn every fish with blood and sweat. But that’s the kind of adventure I like. In preparation for the upcoming summer hiking and backpacking season, I thought I would get clever and carry a very heavy pack full of superfluous things to get in a little extra training. I fished my way down the river for eight hours before deciding I should turn around. It took me two full hours of non-stop wading to get back to where I had departed from the trail, and I am a very fast wader/hiker. My legs were burnt out by the end of the day. But I was rewarded with five cutthroat and a day of solitude on perfect water.

However, while my three weight had been satisfyingly pushed by these 10 inch fish, unsurprisingly the reel experienced no action at all. I decided that I wanted to really put this lightweight rig to the test.

My housemate Tess and I went East of the mountains this weekend on a morel hunting trip. While there, we put aside some time so I could fish one of my favorite, secret, eastside rivers. This river is an incredible gem, dramatically underfished and holding big trout. I never tell anybody about it because the very limited public access means it would be rapidly fished out if people realized just how amazing it is. Every time I go I expect to catch a fish between 15 and 20 inches. That’s an average of course; some days it’s three, some days it’s none. This would be the test for my new rod and reel: if I did hook I would surely experience the pawl aspect of the Ultraclick.

I hadn’t been fishing for too long when the indicator went down and I set the hook. It was immediately clear that I was about to get the big fish on a small rod that I had been hoping for. I intended to challenge my gear with a 15-inch trout, and I was mentally prepared to lose such a fish if the rod couldn’t handle it. But I soon began to have regrets about this overzealousness as the fish showed all the hallmarks of being enormous. For the first thirty seconds, the fish stayed down, hardly going anywhere, bending my rod to the cork. Even for a three-weight surely this was a bit much for a 15 incher. Finally, I felt the fish turn upward and rocket to the surface. A monster summer steelhead splashed up into the air. While the jolt of adrenaline that shot through me is part of what I live for, my heart dropped. I was ready to lose a 15-inch trout, not a summer fish so massive it was bigger than my one and only winter fish this season.

Everything was changed, and I was taking this far more seriously. My first time ever using a click and pawl was a trial by fire. Unfortunately, I couldn’t push the fish hard, like I should have, instead of having to tire it out much more than I wanted, it being on a three-weight and 4x tippet. I played it for 10 or 15 minutes, enduring multiple heart-stopping runs as I desperately tried to feel out the right amount of pressure to transfer from my palm into the reel. As the fish did begin to tire, I realized that I would be unable to tail it myself, limited as I was by the gear. Instead, that job fell to Tess, who had never landed a fish of any kind in her life. As the fight drew to a close and I brought the fish into the shallow water below me, Tess stepped out to try and grab it. The steelhead thrashed around, hampered as it was by me pulling on it and the shallow water, unable to orient itself and turn for another run. As it did so, its head came out of the water, transferring the total weight and strength of it directly into the tippet, and with one final shake, the line snapped.

I wish I could say that I got everything I wanted out of that fish. I certainly got all the fight and the intimacy of playing a fish on a light rod without any drag for assistance. But if I am honest, I also wanted to lay hands on it. I wanted a picture with a fish that incredible, that far from the ocean. I wanted a closer look than what I had gotten throughout the fight. I got 90% of what I wanted from the experience of a big fish on a three-weight, and I would still be willing to play a 15 incher on it. But from now on, if there is ever the chance of a fish that enormous, the three weight stays in the car.

Fisher ReportTrout
Fisher Munro
Be the first to comment...