A Tale of Two Trips 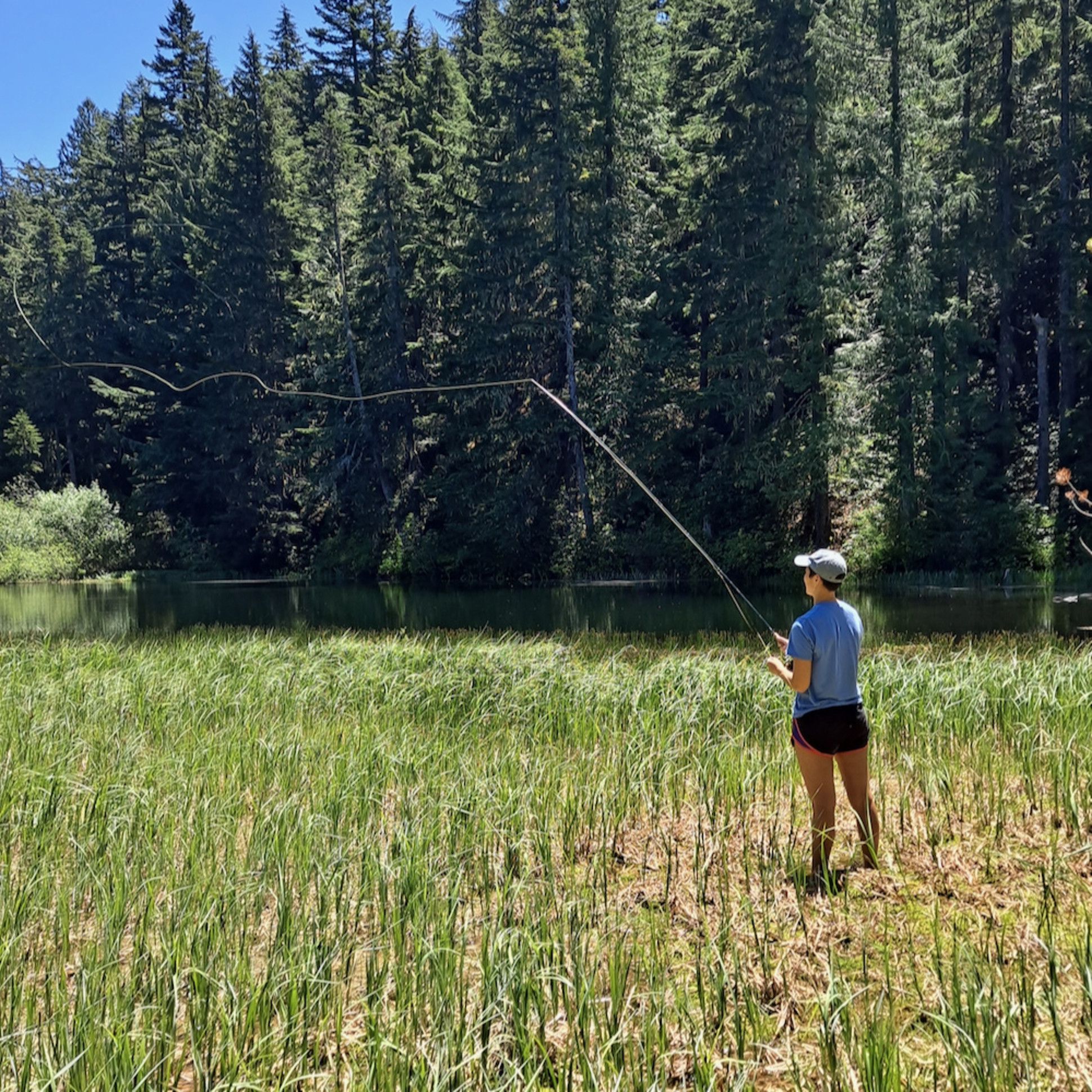 The callibaetis were already dancing their early afternoon ballet when my girlfriend and I arrived. Earlier that morning we had packed up our lunches, hopped in the car, and drove to the trailhead in search of an alpine lake. Hiking to, and fishing, mountain lakes is my favorite thing to do. I’ve hiked to well over three hundred different lakes, and have been to many of them on multiple occasions. But this one was new to both of us. The trail took us through a blooming rhododendron forest and up the spine of a steep ridge. It was a biome neither of us had seen before, being recent arrivals in this area. The scenery distracted us from the lively burn in our calves and seemingly transported us to the gem that was our goal.

The lake was tiny, more of a pond. Its edges were marshy. Vibrant green grass and moss transitioned into reeds, weeds, and finally open water. Fish were stalking the mayflies from just beyond the edge of the reeds. Standing on a rock I could look into the water and see an overabundance of tiny brook trout competing for a meal. In habitats like this brook trout stunt their growth by spawning prolifically and eating themselves out of house and home. I was fascinated to watch their aggression. They would go so far as to leap from the water and snag mayflies in mid-air.

The last time my girlfriend fished with me was on the Deschutes. It was entirely indicator nymphing; all roll casting and water loading. She had never attempted a backcast before. But I wasn’t going to let a hatch like this go to waste. Plus, she would need a backcast to get the fly out beyond the reeds. We had a quick lesson in the grass along the bank, casting with no fly on the line. I was delighted, and proud, of how quickly she picked it up. I’ve never seen anybody learn that fast. She remains far from a good caster, but her intuitive understanding of how the line needs to load the rod is going to speed her on her way while she works on the mechanics. After a mere ten minutes, we tied on a tiny purple haze and set to work. Her first several casts fell short or caught in the grass behind her. But the fourth one reached out just beyond the reeds and delicately dropped the fly onto the surface. Almost as soon as it landed a fish burst from the water and Abbey set the hook.

The trout was tiny, maybe 5 or 6 inches. But the fish had all the beauty brook trout are known for: vermiculations on its back, red spots with blue halos, an inferno of orange fading into crimson on its belly, and fins edged with ivory. What could be a better experience for your very first dry fly fish? Your first cast in a mountain paradise, first successful cast ever actually, and you're rewarded with one of the most breathtaking fish in freshwater. While Abbey certainly had fun, it pains me to admit that I was maybe more delighted than her.

I spent the rest of my weekend visiting the Metolius for the first time. I’m sure most of you have seen the gorgeous setting the river occupies so I won’t belabor the astonishing scenery. The fishing was nowhere near as prolific as it would have been if I had gone to the Deschutes. But I have never before had the pleasure of angling a technical dry fly fishery. It was amazing even though I only caught maybe 10 fish. I’ve done lots of dry fly fishing but nothing like this. I’ve never before stalked the banks, watching for a rise. I’ve never before picked out a specific feeding fish, and carefully chose the fly I thought that fish was most likely to take. I’ve never before been rewarded by that classic trout rise: mouth followed by dorsal followed by the tail as the fish sucked down my bug.

The first day was hot. The Metolius is chilly, but I was sweating even while wet wading. Early on I picked up a fish that I had spotted in a log jam. I carefully threaded a pair of nymphs to him with the help of a Euro rod and landed my first Metolius bow. I went fishless for the next 7 hours. Finally, around 5 pm, I saw the green drakes start to come off. I guess the hatch was delayed because of the heat (although it didn’t happen at all the next day which was overcast and mild). In all honesty, it was mediocre at best. But it was enough to get the fish looking up. I rose two fish to a drake cripple but lost them both. The drakes stopped pretty quickly but they tapered off into a large mixed hatch of olives and PMDs.

I was watching a fish rise on the far side of the river, tight up against the bank. It was nestled into a slot with an overhanging bush a foot or two below it. The backcast space was limited and I had foolishly hiked a long way from the car with only a 3 weight. The distance wouldn’t have been a problem with a 5 weight, but it was going to push this rod. I tied on an olive Quigley Cripple and started casting. I was able to make do with a narrow slot in the brush behind me but I still couldn’t shoot the fly far enough. I also needed to hook the cast onto the water so the line would land above the fly. Otherwise, it began to drag immediately. I stepped out a little farther, water up to my waist, but still couldn’t quite reach. I could see a log on the bottom several feet in front of me and I got up the guts to take a big step across the gap and, with the help of a wading staff, stick the landing. I was now standing in water halfway up my chest, struggling to balance on a slick log in mild current. But I held the rod and line up overhead, hauled a perfect cast... and the fish missed.

The second time was the charm as the fish made sure to rectify its prior mistake. Picture this: a 6’ 2” tall man chest-deep in a river. He’s holding a tiny rod overhead as a fish bends it to the cork while taking off downstream. What are his options? I did the only thing I could: hop off the log and swim my fish down. I was holding the rod out of the water, managing the line, and swimming down and towards the bank all at the same time. Slack was introduced into the system more than once. I finally got close enough to shore to get my feet under me again only to have the fish dart under a log sticking well out into the river and get tangled up in the branches. I ran down stripping line as I went. I hurried out onto the log, or at least as much as one can hurry when on a balance beam. I untangled the line, and the fight was back on. I landed that fish.

That’s my miracle fish. The first fish I ever caught on a dry fly, in a technical dry fly fishery. It tested my ability as a fly fisherman. It was an exceedingly difficult cast to get my fly, with no drag, on the fish. It tested my commitment to landing the fish. But I passed the test and was rewarded not only with that fish but, in the very next spot I came to, with the sight of trout rising with abandon through the length of the run. The hatch didn’t last much longer, maybe 30 minutes. But in that time I whaled on them, catching almost all of my total fish for the trip, except for the one I nymphed and the singular one I landed the next day. It feels like I’ve discovered a whole new world of fly fishing. I love all the fishing I already do, but this is like I’m a kid again discovering it all for the first time. It was the most fun weekend of fishing I’ve had in a while, and that’s saying something. Soon, I’ll be back for more.

Metolius River
Fisher Munro
Be the first to comment...